This is a reprint of an obituary and a newspaper article from 1898.
It is reproduced from:
http://freepages.history.rootsweb.com/~jwheat/obits/obits98.html
(Check out this page!) 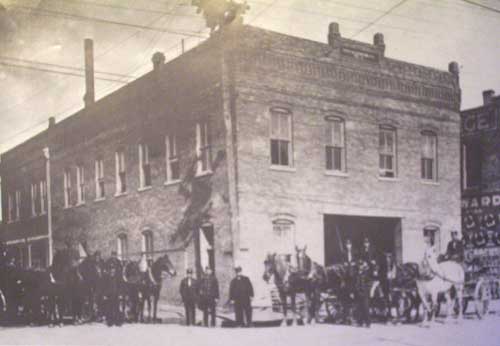 There was some speculation about the
circumstances and a firefighter's actions.
A firefighter by the name of W. E. Lacy gives his
account and defends himself below.

"He Gives His Version of FF Cowan's Tragic Death."
- May 31, 1898, Dallas Daily Times Herald, p. 4, col. 3.
To the Times Herald:
Dallas, May 31.--Since the late fire, I have been confined to my room nursing my burns and bruises, and have not seen a newspaper reporter, nor authorized any of the numerous statements credited to me. As I was the only fireman with unfortunate Cowan, the unfair statement of a Mr. Kennedy that said fireman threw his hose out of the window and ran down the steps, and the additional statement by said Kennedy in this morning's News, that he left no one in the front end of the building where Cowan was buried, is my excuse for now appearing in print.

I do not believe that Mr. Kennedy could ever convince the present members of the fire department, Chief Wilkinson, or any of the old members that I ever threw a hose down or deserted my post, leaving Kennedy, or any one else to bear the brunt. I was in charge of the chemical engine after I reached the fire. I carried the line into the second story of the Lehman building from Elm street, played on the walls of the Lehman building back to the opening in the rear of said building, between that and the Shields building. While there, the first tank was exhausted. A young man (Cowan, I suppose) held the nozzle, while I ran through the second story of the Lehman building to Elm street and called to a young man (Overstreet) to dump the other tank. I then ran back to the Shields building and Cowan had entered the opening into the Shields building with the hose, which was not working, something being the matter with the valve. I took the nozzle, and Mr. Lehman, Cowan and a fleshy man assisted me in turning on the valve so that the nozzle would work.

I then entered the Shields building and went to the first opening in the Dorsey wall, Cowan keeping with me. I warned Cowan twice to get out because the smoke was getting so dense that he would be suffocated. He evidently did not want to leave me alone, because he stepped back some eight or ten feet and remained standing a few minutes, until the wall fell that completely buried him. I was knocked down by the wall, or something, as my back and shoulders will attest. My legs were pinioned by the hot bricks, and in extricating myself, my left boot was left under the brick. Cowan was buried under at least six feet of hot brick between me and the opening where we entered the building. At first, he yelled lustily five or six times. I had to crawl over the brick, under which, Cowan was buried, to reach the opening where we entered, which I found blockaded, and had to kick the sash out of a small window opening into the space between the Shields and Lehman buildings, through which, I escaped, going thence down the stairs through the Lehman building to Elm street. I had to kick the glass out of the front door of the Lehman building to get on to Elm street. After I crawled over where Cowan was buried, I could hear him faintly moaning. I could not get to him, nor, could any one else from that end of the building. He was completely covered with bricks, every one as hot as fire could make it.

When I entered the Shields building with Cowan, after having had the second tank of the chemical turned on, I saw Mr. Lehman, a fleshy man, and another party at the opening, and Fireman Ramsey was standing at the head of the stairway of the Lehman building adjusting a sponge over his end of the building except Cowan. After entering the Shields building, I saw no one at all in that building].

I desire no notoriety, nor shall I engage in any newspaper controversy. I have nothing whatever to say about what any other party did. To the extent of my ability, I did what I conceived to be my duty at the time.
W. E. LACY.
- May 31, 1898, Dallas Daily Times Herald, p. 4, col. 3.