- Glossary -- Its Not a Fire Truck!-- What Firefighters Really Do -- History -
- EMS and The Fire Service -- Ranks and Organization -
- Hiring Process & Training -- Working With the Media -- Tips For Reporters -
- FAQ's & Trivia -- Articles and Stories -- U.S. Flag Code & Customs -- Contact -
Contents Copyright© 2011 by the various contributors.
Click here for use guidelines.

You might ask, "Why is this article advocating something we already do?" The art of communication involves more than a few well-known phrases or words in a sometimes noisy environment. As humans, we can, and should, employ all the tools at our disposal to communicate. Some predetermined hand signals can serve to improve the odds that your message will be received. This article is not about replacing radio or face-to-face communications, but rather about supplementing it with something we can all understand.

Hand signals and other forms of non-verbal communications are very useful and can be developed and expanded upon very easily. If you are not using hand signals, sit down and discuss this article for just a few minutes and then respond to a traffic accident. You will find yourself using them that day.

SELECTING SIGNALS
Traffic accidents seldom involve one vehicle or one patient. Often I'll send one crew member to one vehicle and another member to another vehicle to evaluate the situation. When a paramedic places both hands on the sides of their neck, everyone immediately understands the situation. I don't have to tell my firefighter to get a backboard, C-collar and other equipment. This is probably the most common signal we use. When the members of my station sat down to discuss hand signals, we thought there would only be six or eight to consider. But by the time we were done, we had come up with more than 30 we considered useful.

We put them in two categories: calling for equipment (axe, thermal imager, O2, etc.) and calling for actions (charge line, pack up and go home, low air, etc.). Note: A few departments have actually formalized hand gestures for department-wide use, but this isn't necessary. Make them for just your station or your crew and they'll still be useful.

At times it took a little imagination to come up with a signal that was clear and easy to remember, but now, none of them will ever be forgotten. For the most part my crew’s signals are based upon the action of use, such as a chopping motion for an axe or the motion of a balloon throw for a salvage cover.

THE CONEHEADS
One example of a signal we won’t forget is the gesture we use for traffic cones. We were at a small vehicle fire on a service road. Recent floods had deposited debris between a car's catalytic converter and the heat shield. Of course, the car’s owner did not realize this until days later when he was driving the car and smoke started pouring out from underneath the vehicle. It eventually grew into a smoldering fire with virtually no damage to the vehicle. That day, we were giving a brand new rookie a chance to figure out how to put this fire out. I was trying to tell my engineer to get out the traffic cones, but the noise of the engine prevented him from hearing me. I formed my hands into a little teepee shape. He looked at me like a dog hearing a sound he did not understand. Later he told me that he was wondering why I was asking him to pray and then pointing at the ground. We decided that hands forming a point and held over the head would be our signal for traffic cones.

DISCREET COMMUNICATIONS
There’s one other category of gestures: discreet communications.
At times you may wish to communicate with a crew member in ways you don’t want the victim or other bystanders to understand, such as summoning the police, getting restraints, etc.
I have intentionally refrained from describing all of the gestures used by my department. Remember: The gestures you select should be based upon your use and decided upon by your crew.

CONCLUSION
Hand signals probably won't fit every situation. Some crews use them while others don't, so communication in those instances may be tricky, but a simple discussion with your crew will soon yield some very useful results.

Captain Mica Calfee has been a professional firefighter since 1980. Prior to becoming station captain 13 years ago for the Irving (Texas) Fire Department, Calfee served as a MICU paramedic, an EMS supervisor, a dispatch captain, an instructor and a state field examiner. He has written several articles for fire service publications. 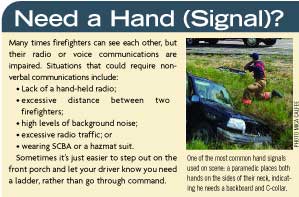 One of the most common hand signals used on scene: a paramedic places both hands on the sides of their neck, indicating he needs a backboard and C-collar.

Need a Hand (Signal)?
Many times firefighters can see each other, but their radio or voice communications are impaired. Situations that could require nonverbal communications include:
• Lack of a hand-held radio;
• excessive distance between two firefighters;
• high levels of background noise;
• excessive radio traffic; or
• wearing SCBA or a hazmat suit.
Sometimes it’s just easier to step out on the front porch and let your driver know you need a ladder, rather than go through command.