This site is not associated with, nor does it represent the views of any particular fire department.

Comments and suggestions are welcomed and valued.
The more input from reporters and fire departments, the better the site will be.
E-mail Comments!

Who This Page is For.

Many fire departments now recognize the importance of the press and have designated, well trained Public Information Officers. (PIO) Some departments will have a staff of PIOS. These people are trained and experienced in how to deal with the press. This page is NOT for those people. This page is for the company officer who suddenly finds himself dealing with the media. It can and will happen at any time. This page is VERY basic and general information. It comes from a variety of sources and experiences. The author has been the person on camera, many times. There are also comments and suggestions from professional PIOs and reporters.

This page is NOT about how to set up and deal with the press at the large, spectacular incidents. Those are best left to the pros. If there are crimes scenes, multiple fatalities, arson or other factors that may land this story on national news, the company officer probably has no business talking to the press. During a large scale event Incident Command will undoubtedly set up a PIO or some other press and information division. This page is for the individual officer or firefighter who is caught, by the media, on a small scale incident. For the larger events or incidents it will almost ALWAYS be best to refer questions to Command or to the Information Division. After all, if the incident is very large, the lower level company personnel will have very little knowledge of "the big picture."

If you are going to be the PIO for your department there are many resources you can study on the subject. NFPA and IFSTA have books on the subject and most fire officer training courses will cover the subject to some degree. 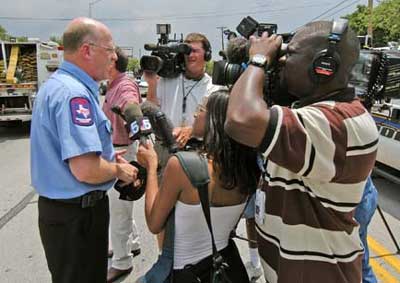 Public Information is a function of Incident Command. In many cases the actual person in command will talk with the media. But there are times when Command will delegate this to someone else. There are also small incidents where, for some reason, the press will show up and want a few comments. It might be as simple as a small grass fire. You never know. The Lieutenant on the scene IS Command and will have to deal with this right there and then. This page is for those moments.

You may think that answering a few simple questions about an accident or a grass fire can't get you in trouble or make your department look stupid. You are wrong. It is very easy to cause all kinds of grief for you or your department. The good news is that with a little caution and advice it is easy to avoid as well. 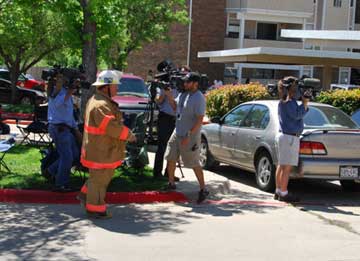 The Press Can Be Your Friend or Enemy; It's Up To You.

First and foremost, remember this. The Press is not out to get you. They are not there to see what they can do to embarrass your department. They are there to do a job. Believe it or not, they are part of the same team that you are on. They serve the public. They are just as much a part of the team as the police, the water department or the Medical Examiner. 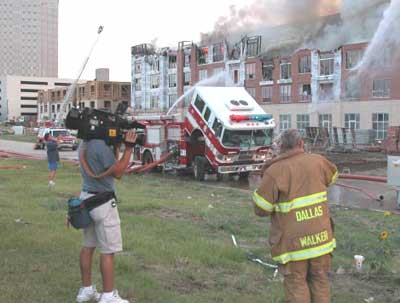 Reporters have a right and reason to be at emergency scenes. This does not mean that they have a right to interfere with emergency operations or go anywhere they want. The fire or police department must weigh many factors when granting media access to locations or information. But this does not mean that you have a right to arbitrarily impede reporters from doing their jobs. It you show an interest in working with them, they are usually delighted to work with you. 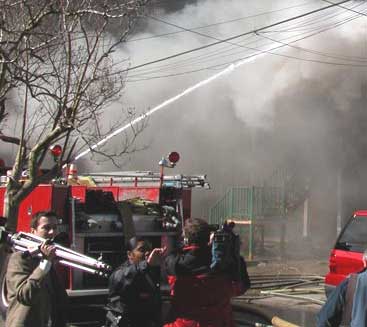 - Prepare Ahead of Time

Find a clipboard. Jot down some simple facts. What time did the call come in? How many firefighters did it take to control the fire? A clipboard looks professional. If someone asks a question and you don't know the answer, let them see you write it down. If there are several media crews there, write down who they are. 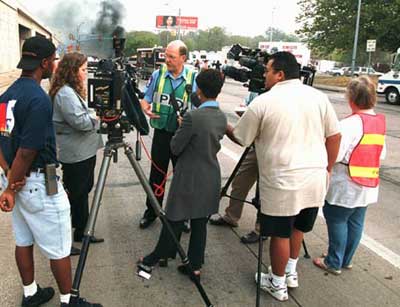 - Do not look directly into the camera.

Let me say that again. DO NOT LOOK DIRECTLY INTO THE CAMERA! Unless you are a preacher, a magician or selling products on QVC you do not need to look straight into the lens. You are not a news anchor. You are being interviewed. Keep eye contact on the reporter. If there is no reporter, look at the cameraman. 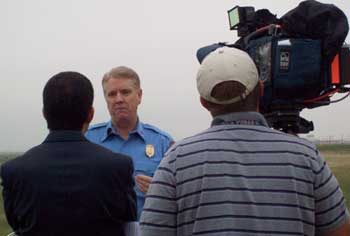 The author of this site in an interview, looking at the reporter.

- Know your department's policies or SOPs about talking with the media.

There are may ways to have problems with the media and make things worse for you and your department. Not knowing your departments policy is probably the easiest way to mess up. Some departments have a simply rule such as this one from an actual memo, "The city has implemented a new policy regarding media relations. Effectively immediately, any message to any media entity must be cleared through the department director. This includes news releases at fires, etc."

If you don't really know your department's policy and procedure you should probably find someone else to speak to the the media.

- Start with what people would know had they been listening to a scanner.

When the reporter sticks a microphone in your face and the lights come on, they want you to talk. Start with what happened with the first arriving companies. "At 4:25 AM we received a report of a structure fire. While enroute we received reports that someone may still be inside. The first arriving companies reported heavy smoke and fire. Crews were able to make entry and quickly bring this person out. EMS crews were on hand to administer medical care."

You have said a great deal without saying anything that someone listening to a scanner could not have figured out.

This implies that you are hiding something. It is probably better to say that you don't know or you are protecting the privacy of the victims etc.

Use words like "challenge" or simply state the real situation. If the media says, "Did you have problems gaining entry to the structure?" you might reply with, "Every structure presents it's own challenges but we have the training and tools to overcome them." You might also say, "We did encountered burglar bars on the front door. We carry tools for quickly dealing with that situation."

Just take that expression from your vocabulary. I have on tape, interviews with fire chiefs, who say "at this time" in every sentence. One chief said it twice in the same sentence.

- Never give any personal information.

New federal laws and normal patient confidentiality may prohibit you from giving out ANY health information. Be careful not to identify fatalities or talk about actual conditions people may not want the world to know about. Many departments have policies based upon the new HIPAA regulations. It is a good idea to be familiar with your department's HIPAA policy before saying a word. For more information about HIPAA see: http://www.hhs.gov/ocr/hipaa/

- Nothing is "off the record".

- You are always on stage.

Just because they are not aiming a camera at you doesn't mean they are not still listening to every word you say. You might step away to discuss something with command or a firefighter and think you are not speaking to the media. If they can see you, they can hear you. Their microphones can listen to you talk to another firefighter several feet away. If you and a firefighter talk about the cause of the fire the story will just say "an unidentified source says the fire was caused by a gas leak." They might even play your voice over the story. (This is VERY embarrassing.)

If there are things that you don't want to release at that moment, say so. If you don't know something, admit it. Say you are looking into it (only if you really are.) If you say you will look into a situation, do so. Rest assured that they will wait around and ask you if you have. (Remember that clipboard? Use it.)

- Talk only about what the fire department did.

Do not talk about the scene or the structure or the patients. The most innocent of comments can get you in trouble with the police department. What if you said, "When we arrived we found three people who had been tied up, beaten and locked in the back room." You can bet that this statement will be on the news. Police, sometimes, like to keep details like this out of the news. By knowing, or controlling, what is public knowledge and what is not, interviews with suspects can be very revealing. People do confess to crimes they did not commit and guilty people deny things they should not know about. The control of information is very important to the police.

It is not hard to be a good PIO, but it is easy to be a bad one.

Remember, a simple slip and suddenly you or your
department becomes the news.

Contents Copyright© by one or more contributor.
All Photos used by permission of owner.
Please contact for permission to reproduce anything on these pages.